KirVonte Benson was Tech’s ball carrier for the first four plays of the game, and on the fourth carry Kendall Joseph forced a fumble that was recovered by Van Smith.

Clemson responded with lightning speed by throwing two consecutive hitch routes to Deon Cain. On the second catch he broke a tackle and raced the remaining 38 yards to pay dirt.

Kelly Bryant showed that he was back to normal on a seven-yard scramble, but he took a six-yard loss while being tripped up on a rollout.

The rain influenced the game once again as Travis Etienne slipped and fumbled the ball away to the waiting cornerback Step Durham.

Georgia Tech took advantage of their opportunity and KirVonte Benson redeemed himself with a 65-yard rush inside the ten-yard line. It was the longest run against Clemson this year by twenty yards.

A Clemson defense notorious for limiting red zone touchdowns held Georgia Tech to a 25 yard filed goal to make the score 7-3 with 4:53 in the first quarter.

Kelly Bryant and the Clemson offense wasted no time as the eight play, 55-yard drive ended with a 20-yard score by Milan Richard (his first career score). Milan Richard’s uncle Herschel Walker is in attendance.

The defenses dominated the game with the assistance of the rain, with a few big plays occurring between punts. Adam Choice had a 26 yard run.

Clemson broke the scoring drought on a 10 play, 71-yard drive that ended in a two-yard score by Etienne with 3:26 left in the first half to go up 21-3. Kelly Bryant almost scored on a 17 yard rush the play before, and he threw a beautiful 16 yard pass to Diondre Overton on the third play of the drive.

According to Chris Fallica, KirVonte Benson’s one play accounted for 65 of Tech’s yards. Tech’s other 26 plays have accounted for 51 yards. In the last five meetings, Tech has two first half touchdowns (David Hale’s Twitter).

Clemson has outrushed Georgia Tech 128-116, won the time of possession battle, and thrown for 143 yards against their negative six passing yards. Georgia Tech is 1 for 8 on third down as opposed to Clemson’s sixty percent conversion rate (6 for 10). The teams have combined for four fumbles: three by Tech (one lost) and one lost fumble by Clemson.

The Tigers have stayed committed to their running game by using their stable of running backs plus Kelly Bryant. In the passing game they have rolled Kelly out and kept the Yellow Jacket defense on their toes.

Kelly has taken the field by storm in his comeback by accounting for 205 total yards in the first half. Bryant’s health was Clemson’s biggest question, but the positive answer combined with the defense’s usual consistency places Clemson in a good position to win the game. 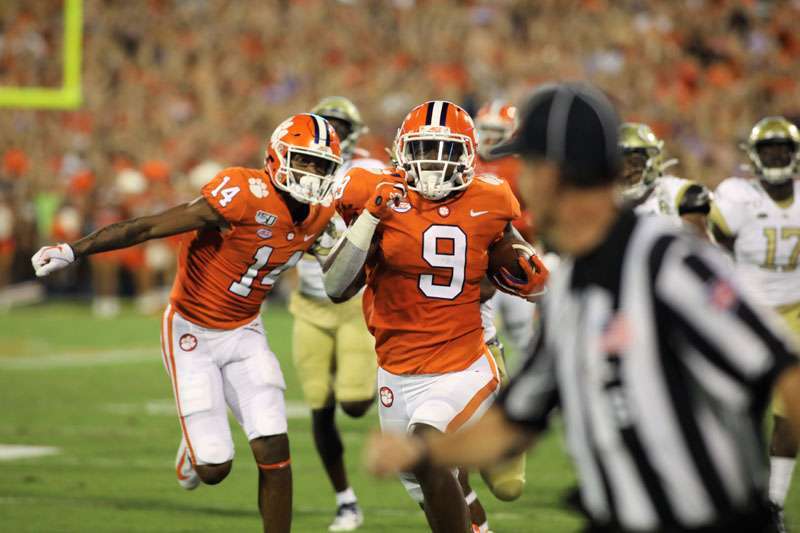