The Wolfpack were rowdy under a Full Moon, but the Tigers chased NC State down for a 38-31 win.

The Wolfpack hammered Clemson early as Tim Kidd-Glass intercepted Kelly Bryant on the first third down and then Ryan Finley threw a 40-yard score to a wide open Kelvin Harmon on their first third down of the game.

Ray Ray McCloud struck back by scampering 77-yards for a score on a punt return, the first in his career and atoning for his flub at Troy last year. It was the first punt return for a score since Adam Humphries (72 yards against Louisville in 2014) and the longest since CJ Spiller’s 77 yarder in 2009.

Jaylen Samuels then led State to the end zone and in doing so moved to second place on NC State’s touchdown list with 42 scores (he finished with 43 total scores).

NC State used three trick plays on the next drive: a jet sweep toss and pass, fake handoff and spin run, and a direct snap to Jaylen Samuels; and three plays later Finley threw a pass to Samuels from the slot to make the score 14-7.

NC State had two crucial penalties that bailed Clemson out and enabled them to kick a 24-yard field goal to cut the lead to 21-17.

The Wolfpack then gashed Clemson and drove to the red zone, but their momentum stalled and Wise missed the 34-yard kick. Clemson drove the field to the 22-yard line only for State to ice Spence twice and him to miss the 39-yard field goal to end the half.

On the first third down of the second half, J Meyers caught a 15-yard sideline pass draped between two defenders in a possible catch of the year, but the referees decided to look at the play after the whistle was snapped. They overturned the call in an odd decision, forcing a 55-yard punt by AJ Cole to the 10-yard line. K’Von Wallace replaced Tanner Muse in the second half.

Milan Richard made his lone appearance with a 29-yard catch and run from the flat on 3rd and 4. Clemson’s drive ended on a 45-yard pooch punt from Kelly Bryant to pin NC State at the one-yard line.

Two drives later, Ryan Finley overthrew Kelvin Harmon on what would have been a 90-yard score – the drive consisted of three Ryan Finley incompletions.

On Clemson’s ensuing drive at the five-yard line, an Etienne option-toss touchdown was called back by a chop block call on Crowder and Anchrum. On the next play Kelly Bryant threw his shortest touchdown pass of the year, finding Deon Cain on a 12-yard fade pass to make the score 24 all with 3:31 in the third.

NC State cooked up a mediocre drive that ended with five seconds left in the third quarter – just enough time for Clemson to respond. Tavien Feaster ran for an 89-yard score untouched on the last play of the third quarter to make the score 31-21 Clemson. It was the third longest run in Clemson history and the longest since 1993 (Derrick Witherspoon against Maryland).

At this point, NC State was shut out in the second half and needed a momentum changing play. Ryan Finley threw to Kelvin Harmon and it appeared to be a 50+ yard catch and run to change the game, but an illegal block in the back made the play only 32 yards. It didn’t matter to NC State though, because four plays later Finley threw a 15-yard score to Jakobi Meyers to make the sore 31-28 with 12:23 left in the game.

NC State then played “Swag Surfin” – the song that Clemson’s defensive line danced to against Georgia Tech. State caused a three and out by stuffing Etienne on third and one, forcing a 42-yard Spiers punt.

The next time the defense was on the field to respond to “Swag Surfin”, Ryan Finley threw his second interception of the year to Ryan Carter at the 27-yard line in the aptly named Carter-Finley stadium.

Clemson gambled on the following fourth and five and Hunter Renfrow came through again; catching the ball while churning his legs across first down marker and bursting free for a 16-yard gain. Bryant ran three consecutive plays, and on the third one he turned the corner from one yard out to go up 38-28 with 6:31 left in the game.

NC State used their next thirteen plays to march 81 yards in four and a half minutes but Clemson held just outside of pay dirt. Kyle Bambard kicked a 22-yard field goal to cut Clemson’s lead to 38-31 with 1:51 to play.

In an inexplicable decision, NC State’s head coach Dave Doeren decided to kick onside and give Clemson the ball at the 47-yard line. Clemson went three and out with Etienne being stuffed on third and one, and NC State using their three time outs.

74 seconds of drama were to follow as NC State tried to send Clemson to overtime and Ray Ray McCloud came in at cornerback. On fourth and two at the 28, Finley rushed five yards for a first down and Clemson called a timeout with sixty seconds to go.

A 24 yard pass to the four-yard line on fourth down was negated by an illegal shift. Dave Doeren said that “That said it was an illegal motion. We audibled, the receivers were realigning, and the ball got snapped”. Backed up on the 33-yard line, Finley threaded a needle to Jaylen Samuels that was intercepted by K’Von Wallace for a 55 yard return to end the game. An NC State official (apparently a coach) knocked the ball out of K’Von Wallace’s hands on the ending interception.

According to David Hale, Clemson has not allowed more than 104 yards to a wide receiver since 2014, but NC State’s Jakobi Meyers had 105 yards and Kelvin Harmon had 155 yards.

While Clemson’s defense improved in the second half, the concerns are legitimate. There were no hurries and only one sack (Clelin Ferrell) the entire game. Clelin had the best stat line of the game defensively, with 12 tackles (nine solo), a sack, and five tackles for loss. The secondary struggled, but when it mattered they stepped up and locked down the end zone.

Ryan Finley was 31 for 50 with 338 yards, three scores, and two picks. Finley lived up to his standing as a late round sleeper (NFL Draft wise) and took what Clemson gave him the whole game. He started off hot and ended cool. He completed his first fifteen passes, then completed three of his next twelve. His two interceptions came on attempts 36 and 50.

Jaylen Samuels (12 rushes for 38 yards, three catches for six yards, two scores) and Nyheim Hines (eight rushes for 34 yards) were relatively quiet but Dave Doeren noted that “It doesn’t help, when some of your best players aren’t 100% … I think we did a (great) job putting together a package … we scored 31 points.”

Kelly Bryant started off slow, missing his first five throws including his only interception on his second throw. He then completed 13 of his last 20 attempts for seven first downs and a touchdown. His final stat line was 20-38 for 191 yards, and a pick and a score apiece.

Tavien Feaster had his first 100 yard rushing game, with 105 yards on seven rushes (the 89-yard score inflated his averages).

NC State fans proceeded to pelt referees and Clemson fans with trash and two fans were arrested. To make matters more interesting, Dave Doeren complained about a laptop on Clemson’s sideline (about the consistency of officiating): “I wish it was a lot better, Joe. I’d like to know why there was a laptop on Clemson’s sideline that people were looking at, too … maybe they weren’t doing anything, but I was told its illegal to have technology on the sideline.” Tim Bourret said that the laptop belonged to a Clemson student intern in the social media department, and this is clearly a nonissue.

A game against the Wolfpack under a full moon didn’t disappoint in entertainment value, and Clemson is in sole possession of their destiny in the ACC Atlantic Division. Coach Swinney said that “A lot of our guys grew up tonight. This is an unbelievable experience for our group. This was championship-type football where you have to make critical plays in critical situations.” The Tigers will have a chance to clinch at home next week against Florida State and the orange britches will come out. 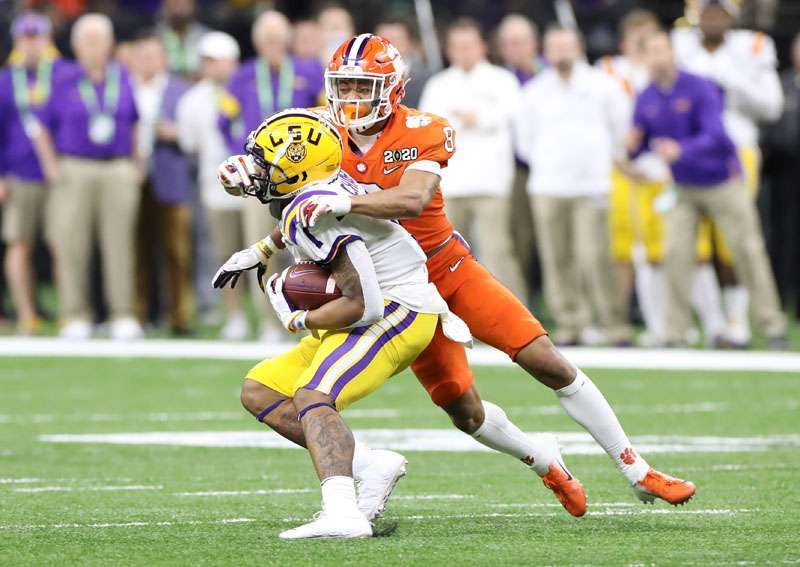 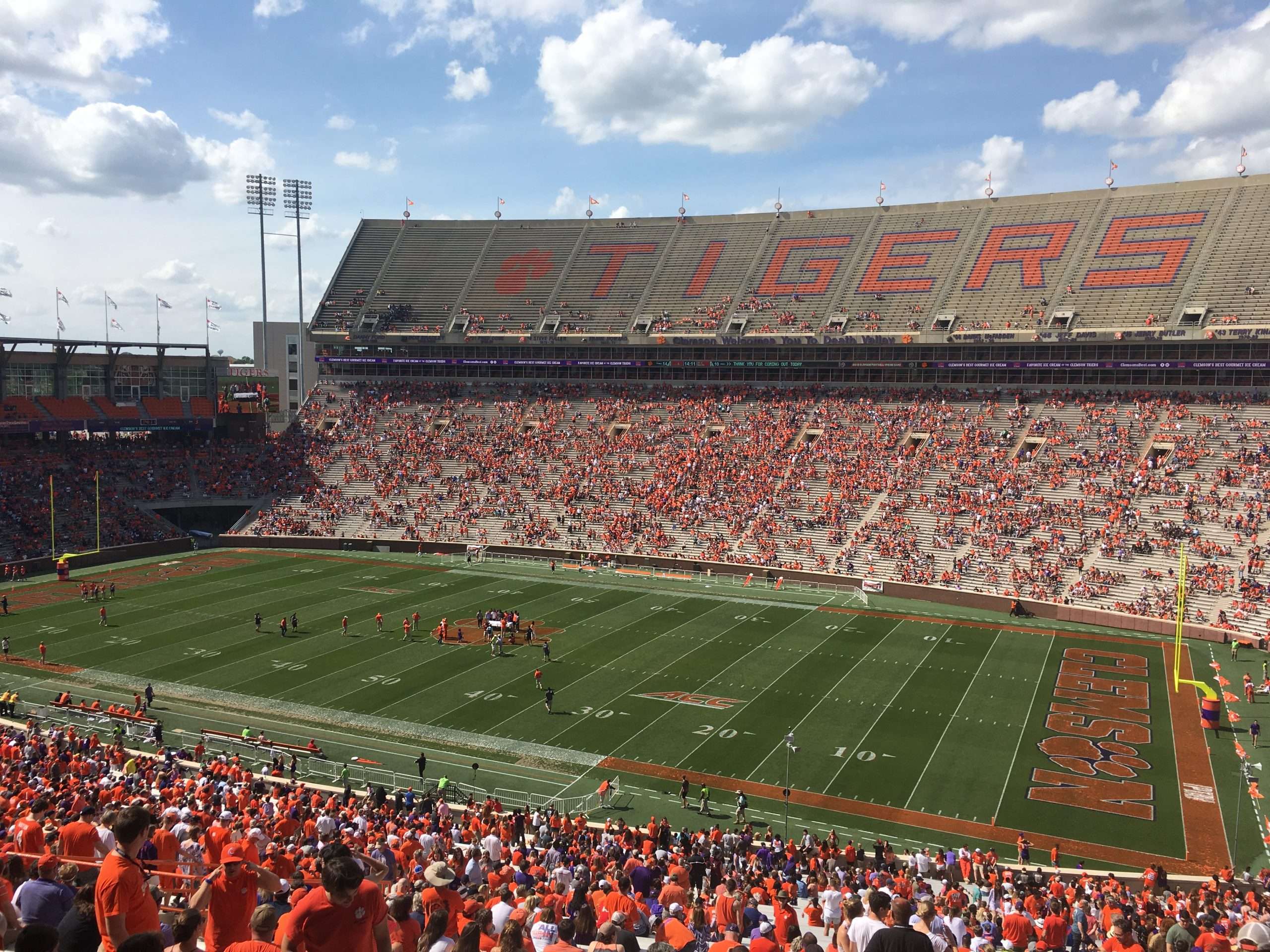