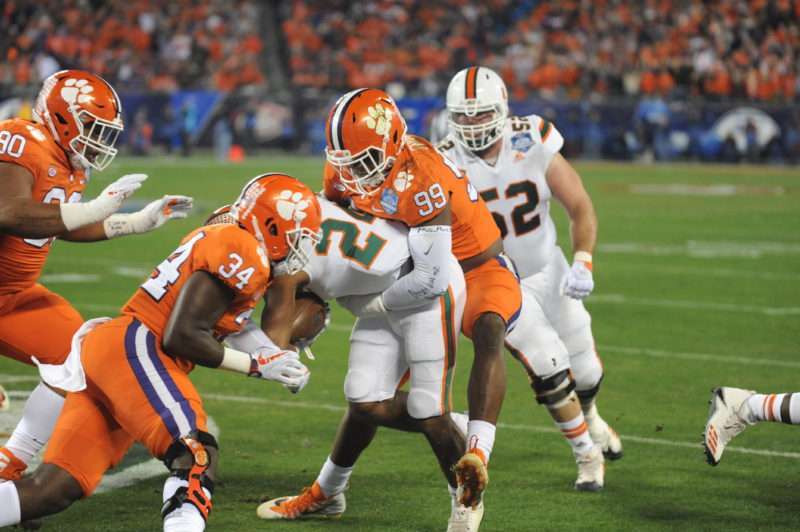 The second largest crowd in ACC Championship history witnessed Clemson’s dominance against an exhausted and outmatched Miami team, and the hungry Tigers clinched their third straight playoff spot. Clemson left no doubt that they are deserving of the number one seed and a spot in the playoffs.

Clemson and Kelly Bryant came out of the locker room blazing hot, posting a 7-0 lead on their opening drive with only one bad play (an incomplete pass).

Kelly Bryant finished Clemson’s second drive with an 11-yard scramble to put the Tigers up 14-0 near the end of the first quarter.

Adam Choice was Clemson’s bell-cow back on their next drive rushing for seven of the play’s nine drives, including three times at the one.

On third and goal from the one, Clemson used the Power-G concept to push the ball through with Adam Choice with 3:46 left in the first half. The 21-0 lead tied the ACC Championship record for the largest lead.

Clemson gained 214 yards on their next four drives, while converting their first seven third downs of the night – their fortune was about to change.

Neither team was able to conduct a meaningful drive to close out the half, and Clemson carried a 21-0 lead in the locker room.

Miami started off their opening drive of the second half well, but a Dexter Lawrence sack on third-and-4 forced the Canes to punt. Feagles’ 39-yard punt was nearly negated, as McCloud’s 19 yard return combined with Finley’s 15-yard facemask penalty gave Clemson the ball past midfield.

Malik Rosier’s 18-yard pass to Jeff Thomas start their next drive appeared to be the spark the Hurricanes needed, but Ryan Carter forced a fumble that was recovered by Dorian O’Daniel.

After starting off white-hot for the first twenty minutes of the game, Clemson struggled in another three-and-out offensive series. That drive was the end of an offensive drought for the Tigers that consisted of four drives for 33 yards.

When Ryan Carter quoted Coach Venables by saying “When the opportunity knocks, you just got to be able to make plays.”, he remembered when he forced the second Miami turnover of the game by catching Rosier’s tipped pass – and this time Clemson capitalized.

Tavien Feaster burst onto the scene with his 11-yard score to extend Clemson’s lead to 31-0 with 3:17 left in the third quarter. Feaster became the fourth different player to score a rushing touchdown for the Tigers in the game.

DJ Dallas ran for 26 yards on three carries as the wildcat quarterback before Malik Rosier returned to the field. Rosier’s return meant yet another turnover.

On Rosier’s second play of the drive, Dexter Lawrence deflected a pass that Kendall Joseph intercepted and returned 37 yards to give Clemson the ball on the 13-yard line.

Malik Rosier described Clemson as, “a great defense” that “plays sound football and that’s what wins you games.”

CJ Fuller fumbled the ball on the ensuing play, but Tremayne Anchrum saved the drive by recovering the fumble for a negative 14-yard loss.

On second-and-24, Kelly Bryant threw a beautiful deep ball to Deon Cain for a 27-yard score. The pass widened Clemson’s lead to 38-0 while giving Deon Cain his 20th touchdown pass – he is the fifth player in Clemson history to achieve this feat.

After forcing a Miami three-and-out, Clemson started their drive on their own side of the field instead of Miami’s for the first time in five drives.

He started out 15-15, then went 1-7 before finishing the night with seven straight completions. Bryant played his arguably best game of the year so far, going 23 for 29 for 252 passing yards and two total touchdowns.

After Ray Ray McCloud’s two fumbles, he bounced back to be the Tiger’s receiving leader with 6 catches for 100 yards.

Despite Clemson’s dominance of the game, they struggled on the ground. The Tigers rushed 41 times for 77 yards, but passed 254 times on 34 attempts.

2017 was supposed to be “Florida State’s year”, and a “rebuilding year” for Clemson – but in Coach Swinney’s words, “We are the attacking champs for another one. We aren’t defending anything.”

Clemson has clinched a conference championship and a playoff spot for the third time in three years.

Clemson is playing its best football at the most important time of the year – the Championship phase.

“Don’t take winning for granted, because its not easy.” – Kendall Joseph 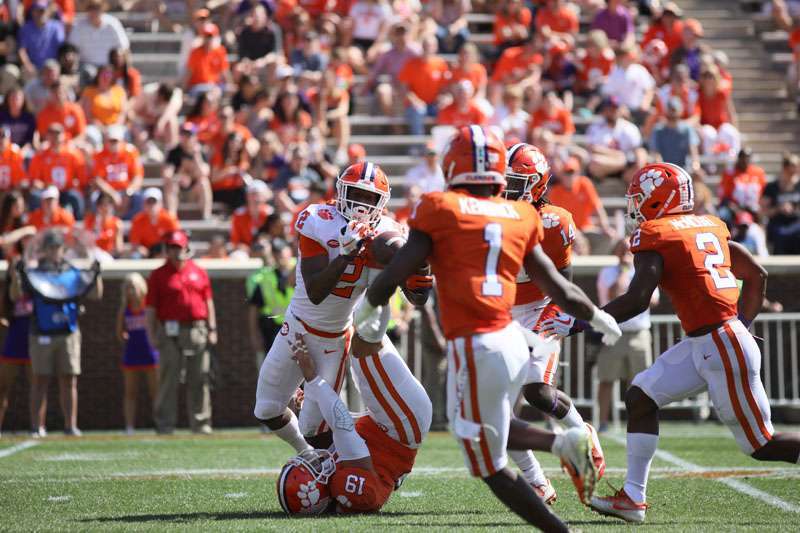