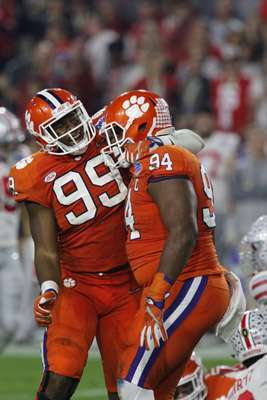 Other than the Deshaun Watson interception early in the game, this half has been a best case scenario for Clemson. The Buckeyes have 88 total yards, and just eight yards on the ground. Clemson’s defensive line has been a menace in the Buckeye’s side by shutting down what little running game OSU has attempted to create. 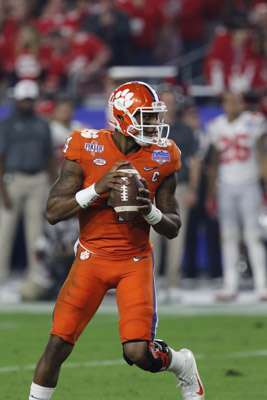 Ohio State’s defensive line is not as talented as the rest of the Buckeyes and it shows. Clemson is able to run the ball with some consistency, and Watson has more than enough time to throw. It also is evident that Clemson’s offensive line is tired of the doubters and have played with a chip on their shoulder. Clemson is averaging four yards a carry, with Watson being the more efficient runner. Renfrow and Williams have been Watson’s two main targets tonight and both have made great catches. Mike Williams has shown why he is the best wide receiver in the nation with several catches against the formidable OSU secondary.

Clemson’s play calling is excellent while Ohio State’s play calling is so abysmal that a fan out of the stands could do better. While it doesn’t help that their offensive line is struggling and that JT Barrett is not passing well – the fact that Mike Weber has one carry is inexcusable.

One last tidbit to ease your nerves: Ohio State’s kicker does not perform well in big games or under pressure. He is 0 for 2 so far tonight, and was inconsistent in pregame warmups.

While it looks like Clemson will forge a path to Tampa and the second consecutive national championship, Ohio State is a quality football team that has the ability to capitalize off of Clemson’s mistakes.