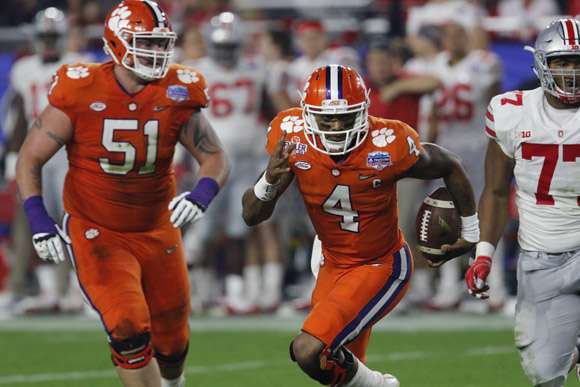 Clemson and Ohio State are two of the most successful and respected teams in the nation over the past five years and they are lead by two of the best coaches in college football. Urban Meyer has a storied coaching legacy that he has crafted by winning at every stop in his career, and his time at Ohio State borders on Saban levels of consistency. He is 61-5 in five years at Ohio State and has recruited a team of extremely talented and young players.

For the first time this year Clemson faces a team that has equal or better talent, and pairing this along with Meyer’s exceptional coaching means that both teams will need to be on their ‘A’ game. Sixteen of their 22 starters are first year players, but almost all of them are four and five star players.

Deshaun Watson’s rushing game is key to Clemson success, and there will be no holding him back in the playoff. I expect each quarterback to rush for at least eighty yards, with a real possibility that both will break 100 yards each. This in turn will enable running backs Wayne Gallman and Mike Weber to have more success on the ground.

The good news for Clemson is that their extremely talented defensive line can defeat Ohio State’s offensive line and force them to pass the ball, which JT Barrett has struggled at this year. The main worry for Clemson is if Ohio State can run Curtis Samuel outside, then he can gash Clemson similar to Dalvin Cook – and it only takes one or two long runs to change a game.

Even though I have repeated this ad nauseam this season, there is so much truth in this prediction: the team that wins will be the team that has the better night on the offensive line. If Clemson is forced to become one dimensional, they will be forced to throw all night and the Buckeye secondary will force Watson into mistakes and capitalize. If Ohio State is forced to become one dimensional, JT Barrett will be ‘exposed’ and Clemson will finish the Buckeyes off.

I think both teams will be ready for this game and will execute at a high level, with the outcome hinging on a few game breaking plays. At the end of the day, Clemson is the more experienced team and I think that experience will lead Clemson to the victory in the desert.