With the three selections, Clemson has now collected a total of 457 ACC weekly honors since 1978. Clemson players finished the regular season having earned a total of 17 selections in 2018.

Against South Carolina, Lawrence threw for a career-high 393 yards on 27-36 passing. He threw his 22nd touchdown pass of the season during the contest, moving into sole possession of seventh-most in a season in school history. He also helped engineer three touchdown drives of 95 yards or more in the game, a first in program history.

Higgins earned his second Receiver of the Week honor, joining his prior selection following a win against Texas A&M in the second week of the season. He becomes the first Clemson receiver to earn the honor twice in one year since Sammy Watkins in 2013.

Last week, Falcinelli graded out at 93 percent with four knockdowns, according to the Clemson coaching staff. He and the Clemson offensive line powered the Tigers to 744 total yards, the third-highest total in program history. 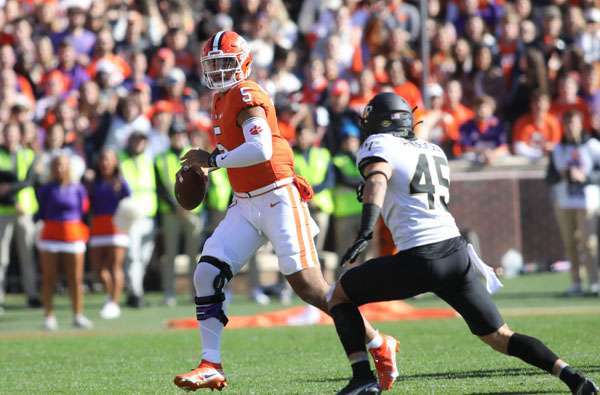