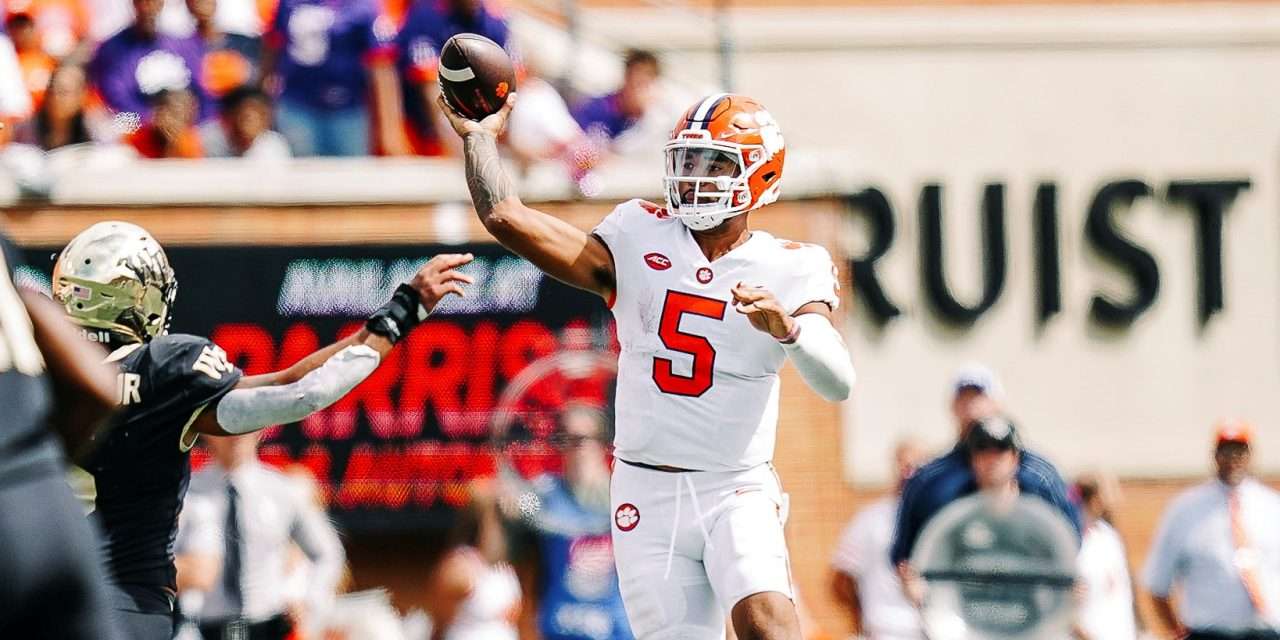 WINSTON-SALEM, N.C. — DJ Uiagalelei threw for 371 yards and five touchdowns, while rushing for 52 more, as No. 5 Clemson rallied to beat No. 21 Wake Forest, 51-45, in double overtime Saturday at Truist Field.

The Tigers (4-0, 2-0 ACC) came up with a critical fourth-down stop in the second overtime to seal their win. Clemson earned the win when cornerback Nate Wiggins batted down Hartman’s final pass of the afternoon in the Clemson end zone on fourth-and-six from the Clemson 21-yard line.

Uiagalelei completed 26-of-41 passes for a season-high 371 passing yards and a career-high five touchdown passes. The junior became the first Clemson player to throw for 300 or more yards, rush for 50 or more yards and throw at least three touchdowns in a game since Deshaun Watson accomplished the feat against Louisville on Oct. 1, 2016.

Uiagalelei found Davis Allen over the middle in double overtime to put the Tigers up, 51-45, with what turned out to be the game-winning score. After allowing six passing touchdowns, Clemson’s defense did not allow a seventh, as cornerback Nate Wiggins batted down a fourth-and-six pass to secure the win.

The Clemson offense got off to a hot start on the first play from scrimmage with a career-long 53-yard run from running back Will Shipley, who finished the day with 104 yards and one touchdown on 20 carries.

Uiagalelei then found Jake Briningstool in the back of the end zone for the first points of the game, capping an 8-play 88-yard drive. He later connected again with Briningstool on a 30-yard pass down the middle on 3rd-and-21 to keep the second drive alive.

On the next play, Brannon Spector hauled in a 41-yard score.

Clemson led 20-14 at the half, despite outgaining the Demon Deacons, 309-129. The Tigers were flagged for seven penalties for 85 yards in the half.

Wake Forest (3-1, 0-1 ACC) started the second half strong, forcing Clemson to punt on their first two possessions while producing two touchdown drives of their own to take a 28-20 lead. Uiagalelei had an answer for the Tigers, leading Clemson 75 yards on nine plays and finding Allen for a five-yard score. He then hit high-school teammate Beaux Collins on a two-point try to tie the game at 28 apiece.

Wide receiver Joseph Ngata and Shipley came up big for the Tigers on third downs. A 46-yard pass to Joseph Ngata brought Clemson to Wake Forest’s 28 yard-line. A few plays later on 3rd and goal, Shipley pushed his way through defenders and extended his arm over the goal line to even the score 35-35 with 11:16 left in the game.

A 29-yard field goal later gave Wake Forest the lead back with 8:07 to play before Clemson’s B.T. Potter drilled a 52-yarder to tie the score at 38-38 with 4:06 left to play, which eventually forced overtime.

After the Demon Deacons got a Sam Hartman to A.T. Perry touchdown on their first overtime possession, Clemson responded when Uiagalelei lofted a ball for Collins, who secured the pass to tie the game at 45-45.

The Demon Deacons racked 447 yards of offense, 337 of it from quarterback Sam Hartman, who threw six touchdown passes and completed 20 of 29 passes.

The Tiger’s will return to Death Valley next week to face the NC State Wolfpack in Memorial Stadium on Saturday, Oct. 2. Kickoff time is set for 7:30 p.m. 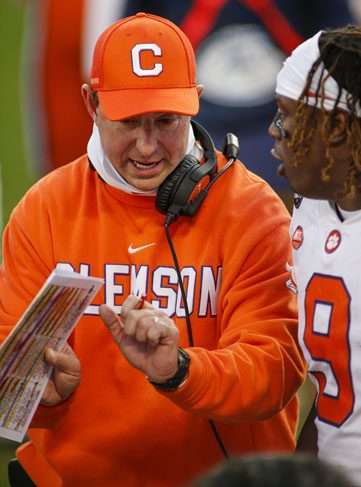